The crowdfunding site that supported Sandra Mathews-Benham’s book about her family’s experience with Alzheimer’s disease has been acquired by AIM, an Omaha nonprofit that promotes technology careers and education. The site, Hatchfund, lets donors give to artists such as Mathews-Benham, a professor of history at Nebraska Wesleyan University who is writing about caring for her father, who suffered from Alzheimer’s. His doctor’s bag is in the foreground.

When fans of Sandra Mathews-Benham’s blog suggested she turn her posts into a book, the Lincoln author and professor knew it would take more than just time.

She needed money, too, so she turned to crowdfunding and successfully raised the $5,500 needed to upgrade her computer, take time away from teaching extra classes and hire a copy editor to ensure her manuscript is error-free.

The crowdfunding site that supported her book about her family’s experience with Alzheimer’s disease has now been acquired by an Omaha organization that expects to expand its influence nationwide. AIM, a nonprofit that promotes technology careers and education, has acquired and renamed the former USA Projects, now Hatchfund, which lets donors give to artists, helping them complete projects like books, films, albums and plays.

AIM is the second local organization running a crowdfunding platform, joining Woodmen of the World, which last year launched Red Basket. It allows donors to give directly to people who need assistance after a health emergency, accident or natural disaster, and to give to groups that benefit the community at large.

If arts funding doesn’t seem a likely fit for an IT organization, AIM didn’t think so either — at first.

The idea came from arts patron and Omaha Steaks owner Todd Simon. Simon is on the board of United States Artists, a California organization that developed the crowdfunding platform. He told AIM that the organization no longer wanted to run the site and was looking to find a group that did.

“We thought, geez, this doesn’t have anything to do with AIM,” said Mike Swope, AIM vice president of operations. AIM is known in Omaha for its CareerLink jobs board and for the annual InfoTec information technology conference, as well as for youth technology programs.

But as Swope and others at AIM talked with Simon, they saw a fit.

The arts are increasingly seen, along with technology and other STEM (science, technology, engineering and math) fields as essential to economic development. In fact, there is a “STEM to STEAM” movement, led by the National Science Foundation, the Rhode Island School of Design and others to incorporate more arts education into schools to boost innovative thinking.

Swope said not only can Hatchfund connect artists to funding, but educators also can use it to find donations for classroom projects in arts, technology and other areas.

Swope sees Hatchfund as a future source of revenue for AIM, which announced this year an effort to expand nationwide. He called it a “social enterprise,” similar to how Goodwill operates thrift stores to fund its employment and job training programs. AIM had revenue and expenses of $6.05 million in 2011, the most recent year for which its tax returns are publicly available. Of the revenue, $3 million came from CareerLink, $2.5 million from grants and $250,000 from conferences and training.

As a nonprofit, Hatchfund won’t charge any fees, unlike many for-profit crowdfunding sites. A typical fee is 5 percent of the donations raised. Hatchfund instead will request an optional 5 percent “tip,” and will let users know they can donate more than that.

“It does take money to run this,” Swope said. “We are close to break-even. We are not quite there yet. We see all kinds of potential for it.”

Swope said Hatchfund will need to grow if it is to be a valuable revenue source. Growing will be a challenge amid the dozens of for-profit and nonprofit crowdfunding sites that have launched in recent years.

If you’ve never used a crowdfunding site, it’s like a social network where people can describe a project, ask for donations and thank donors by giving rewards at different funding levels — for example, a free copy of a musician’s CD for those who donate $20 or more.

The biggest is Kickstarter, where artists have successfully raised $695 million to fund nearly 117,000 individual projects since it launched in April 2009. The site has more than 4,000 projects live now; Hatchfund has just 59.

Kickstarter charges a 5 percent fee on funds raised for projects that meet their full funding goal. If the artist doesn’t meet the full pledge goal, donors are not charged. There is also a fee for online payment processing.

Another popular platform, Indiegogo, allows a broad array of projects, for the arts but also for businesses, technology projects, education and even personal needs. Indiegogo allows users to receive donations even if the full project amount isn’t reached. It charges 9 percent of funds, but if the full amount is pledged, it cuts the fee to 4 percent. Nonprofit organizations get a reduced fee.

There are dozens more, in niches including funding for parks, nonprofits, science, veterans, apps, nonprofits, journalism, tech startups and others.

Equity crowdfunding is a niche expected to take off in the coming year. With the signing last year of a new law, part of the Jumpstart Our Business Startups Act, startups can now offer investors private shares in small businesses and can use crowdfunding, social media and advertising to market the offering. The U.S. Securities and Exchange Commission recently provided rules describing how startups can attract investors.

In this environment, Hatchfund will have some big competition when it comes to attracting projects, said Colleen Maciejewski, founder and president of Woodmen’s Red Basket.

“They’re going head to head with Kickstarter,” she said. But the field is still young and Maciejewski said a “disruptive startup” can overtake a bigger competitor.

In its first year, Red Basket has paid out more than $120,000 in donations for 28 projects; 13 projects are currently live on its website.

Maciejewski advised AIM to go after distinct markets, including Omaha. “People like a local presence,” she said.

Simon said that’s one reason he believes AIM will make the site a success, along with its ability to operate Web-based businesses and services.

“What is unique about AIM is their ability to get deep within their local markets,” Simon said in an email. AIM has offices in Omaha, Lincoln, Kearney and Scottsbluff, and in Chattanooga, Tenn., and is starting an effort to expand to more cities nationwide.

“I see AIM continuing the national footprint (of Hatchfund) but using their local teams to bring more artists to the platform quickly,” Simon said.

Swope said Hatchfund’s advantages include the lack of mandatory fees and the opportunity for donors to take a tax deduction for their contributions.

Another is Hatchfund’s hands-on approach. Unlike some crowdfunding sites, Hatchfund must approve a project before allowing it to raise money. For the chosen projects, its staff members provide support and coaching on how to best tackle online fundraising.

“We like to think we are experts at educating the artists on what it takes to fund their projects online,” Swope said. One tip is not to count on the generosity of strangers. A large majority of a campaign is funded by an artist’s own network of contacts, he said. The platform just makes it easier to reach out, promote the project and collect the money.

There is a need in Nebraska for an avenue like Hatchfund to help artists fund projects, said Suzanne Wise, executive director of the Nebraska Arts Council.

Individual artists often don’t have the capacity to apply for grants to pay for expensive materials or computer equipment. Crowdfunding, she said, “is one of the great innovations of the last couple of years. It’s capitalism at its best.”

Mathews-Benham of Lincoln said she’s grateful for her donors. “The Best He’ll Ever Be” chronicles her family’s experience as her father, Dr. Jack Mathews, suffered from Alzheimer’s disease.

“It’s really important that I get this right, because I don’t want to dishonor my dad,” she said.

Her donors received rewards such as thank-you notes, signed sample book chapters, recognition on her website and, at the top level, a signed copy of her manuscript, which Mathews-Benham expects to complete by December 2014.

Mathews-Benham hopes her book will help other families who face Alzheimer’s. The funding meant she could conduct research to give the book a broader focus, beyond being just a personal story.

She’s glad to see Hatchfund have the potential to grow.

“There’s not a whole lot of funding for people in the humanities,” she said. “It will fill a void that exists out there.”

Click the links to learn about Dancing Loon Historical Consulting, LLC, or Dr. Mathews' awards, books, articles, and public presentations.
The gravatar is her photograph of Black Mesa. 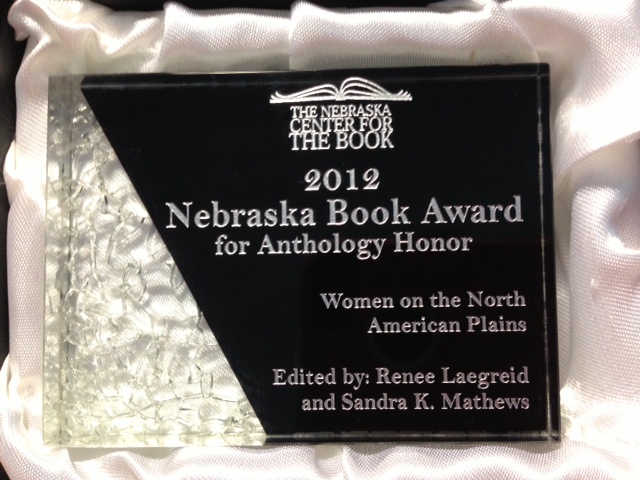 Photo courtesy of the Office of the State Historian